Are asteroids a "natural resource"?


There's been lots of recent discussion about mining space asteroids, and everyone is in a tizzy about how awesome it is to be alive in such exciting times. Criticisms over the proposal are largely over whether it is technically feasible, and whether it is a good (read: profitable) idea.

I want to approach the question from a different direction. The Planetary Resources video (which curiously has not itself gone viral, even if the news of it has) ends with the following line:

"We are going to change the way the world thinks about natural resources."

You might immediately react to this line: Good! Wonderful! We treat natural resources like trash right now. Our poor treatment of this environment is part of the reason why we are looking for off-planet solutions. Hopefully we do start to think about natural resources differently, and if this massive and inspiring project can help us do so, all the better!

This is a problem of semantics, of course: it is a problem with the meaning of our words. Seneca says: When our words our corrupted so is our mind. If we are worried about how we think about natural resources this situation just won't do. If we can't clearly think about natural resources now, how can we possibly evaluate whether these changes are good? These problems need a philosopher.

There's lots of philosophers to turn to for resolving this crisis. Leopold's Land Ethic might offer an interesting perspective on asteroids, but a more obvious place to start is Heidegger's discussion of Bestand, a German word meaning "stock," "holdings," or "assets". It is often translated as standing reserve. Heidegger thinks our use of technology tends treat nature as a standing, available resource in the sense that it is always available to be used by us, as Heidegger says, "so that it may be on call for a further ordering." 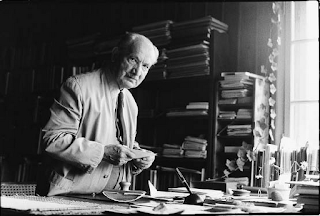 In other words, through our technology we treat nature as if it is waiting around for us to use if for our purposes, as if it is a stockpile that was put there for us to use. Interestingly, the example of a "natural resource" that Heidegger gives is of an "airplane standing on the runway": it's a resources, there available to be flown. Heidegger says:


Yet an airliner that stands on the runway is surely an object. Certainly. We can represent the machine so. But then it conceals itself as to what and how it is. Revealed, it stands on the taxi strip only as standing-reserve, inasmuch as it is ordered to insure the possibility of transportation. For this it must be in its whole structure and in every one of its constituent parts itself on call for duty, i.e., ready for takeoff.

Some commentary on the essay helps clarify:


"Standing reserve" is closely related to the idea of "instrumentality" with which the essay begins. Technology's instrumental orientation to the world transforms the world into "standing reserve." We might say that for technology, nothing in the world is "good" in and of itself, but only "good for" something. In the grip of technology, things no longer get to "arrive." The airplane, for example, has no meaning or value in and of itself; it is merely a means of transportation and its value to humanity is completely tied to its being at humanity's disposal.

And the obvious answer is of course it doesn't. What Planetary Resources offers us is the possibility to extend the scope of "available natural resources" to include near-Earth asteroids, but this changes nothing about the basic way we think about natural resources. If you are unsatisfied about the way we treat natural resources now, you should be horrified at the prospect of extending that rampant consumption into the surrounding interplanetary real estate. We clearly haven't been handling the resources we have in a mature and responsible way, reaching for the stars in these circumstances is more like a Hail Mary pass and less like a fundamental conceptual reorientation.

I don't think mining asteroids is inherently a bad thing. But as humanity extends its awesome reach, it is dreadfully important that we stay clear on what we are doing. It might make us all feel good to think we are changing our thinking about natural resources by leaving our pale blue dot, but in this case we aren't.

Heidegger is just one thinker; there's plenty of other environmental philosophers worth considering when discussing asteroids as natural resources. Who else has something to add to the discussion?

http://plato.stanford.edu/entries/ethics-it-phenomenology/
Posted by Unknown at 7:31 PM

Email ThisBlogThis!Share to TwitterShare to FacebookShare to Pinterest
Labels: Philosophy of Technology