I have been completely enamored with +Jon Kleinberg keynote address from HCOMP2013. It is the first model of human computation in field-theoretic terms I've encountered, and it is absolutely brilliant. 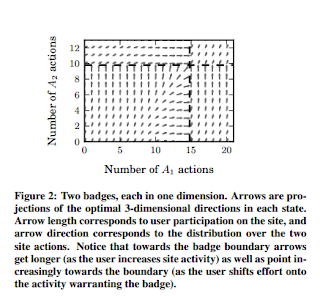 Kleinberg is concerned with badges, like those used on Foursquare, Coursera, StackOverflow and the like. The badges provide some incentive to complete tasks that the system wants users to make; it gamifies the computational goals so people are motivated to complete the task. Kline's paper provides a model for understanding how these incentives influence behavior.

In this model, agents can act in any number of ways. If we consider StackOverflow, users might ask a question, answer a question, vote on questions and answers, and so on. They can also do something else entirely, like wash their cars. Each of these actions is represented as a vector in high dimensional space: one dimension for each action they might perform. In Figure 2, they consider a two dimensional sample of that action space, with distinct actions on the x and y axis. The dashed lines represent badge thresholds; completing 15 actions of type A1 earns you a badge, as does 10 actions of type A2. On this graph, Kleinberg draws arrows the length and orientation of which represent the optimal decision policies for users as they move through this action space.

Users begin with some preferences for taking some actions over others, and the model assumes that the badges have some value for the users. The goal of the model is to show how the badges augment user action preferences as they approach the badge. Figure 2 shows a user near the origin has no strong incentives towards actions of either type. But as one starts accumulating actions and nearing a badge, the optimal policy changes. When I have 12 actions of type A1, I have a stronger incentive for doing that action again than I did when I only had 5. 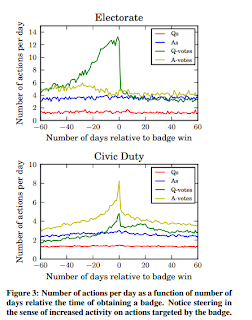 In this way the badge thresholds work like attractors for user behaviors; Kleinberg discussed how to decide where to place badges in order to motivate desirable behavior. It's also interesting to see what happens to user behavior after they cross the threshold. In Figure 2, you see that once you've received a badge in dimension, you lose all incentive to continue performing actions in that dimension. And indeed that's exactly what you find from the data taken from StackOverflow. Figure 3 models the activity of users in the days before and after earning a badge. In the run up to a badge, user activity in that dimension of action sees a sharp spike in activity. After the badge is received, there's a precipitous fall as that activity returns to levels when it is not motivated by a badge.

I've been calling fields like the one represented in Figure 2 "goal fields", because they represent orientation towards certain goals. The goal field describes the natural "flow" or trajectory of users as they move through this action space. In his talk, Kleinberg compared the model to electrical fields, with workers like magnetic filings orienting along the field. He's interested in making the metaphor accurate enough to work for describing the goal orientation of agents in real activity fields like StackOverflow.

Interestingly, his model suggests bounds on where badges might be places, and limitations on what behavior might be extracted from users in this way. Figure 9 from the paper describes this beautiful and confusing landscape carves out by all possible badge placements for two dimensions of action. Notice that some of the action space is inaccessible for any badge placement policy; for instance, no badge thresholds will yield an action policy of (10%, 60%).

I've been fascinated by this paper and its implications for the last few days, and I'm flooded with ideas for extending and refining the model. I'll try to list a few thoughts I had: 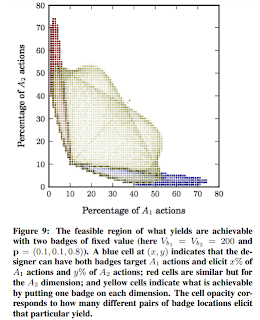 I have much more to say, but I should get back to the conference.

The keynote address was a version of the paper "Steering user behavior with badges", and can be found here: http://www.cs.cornell.edu/home/kleinber/www13-badges.pdf