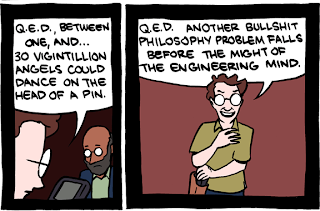 How many angels can dance on the head of a pin? Aquinas' ontological framework implies that angels have some spatial presence, and he devotes a section of his Summa Theologica to work out the implications.  The question is only significant if you already largely accept the rest of Aquinas' view; to most of us, the implausibility of the view looms much larger than the results of this particular logical puzzle within its scope. So although Aquinas was just being thorough, the passage has come to represent the idle intellectual activity that is supposedly typical in philosophy. Aquinas' method applies generally: pick any ontology you like and there will be a variety of logical and metaphysical implications just waiting to be made explicit. Working out the details of a received view can support several lifetime's-- literally multiple named chairs-- worth of philosophical work. Attending to minor logical puzzles within frameworks with major methodological failings has become a successful strategy within philosophy for keeping niche positions alive and immune to the consensus of the field. A poorly defended or ill-defined view isn't a defeater in this world, it is just more fodder for the cannon, further entrenching one's influence and status in the field. To an outsider this work might look like innocuous intellectual progress, but if it has no traction with what we know about the world from our best science, then it is effectively arguing about angels and pins: a waste of time.

Let's use the term "pinhead philosophy" to describe any philosophical writing that engages with ontological or metaphysical suppositions in a manner that is not directly informed by current scientific and mathematical practice, broadly construed. I'll call philosophers who engage in pinhead philosophy "pinhead philosophers". Pinhead philosophy is rampant in the debate over "material objects", especially ordinary objects and their material constitution. It also finds purchase in a view of personhood that appears in action theory literature and the debate over free will, and is conveniently compatible with Christian theology. The term "pinhead" is not meant as an ad hominem against the thinker, or to imply their head or intellectual capacity is unusually small. Instead, the term is meant to implicate the banality of their subject matter, and the degree to which we should take their results seriously. Pinhead philosophy wastes people's time by engaging with obsolete or archaic views that are inconsistent with what we know from the rest of the sciences; pinhead philosophers acquire legitimacy through obfuscation and disinformation that is usually meant to rationalize or vindicate some prior ideological or intuitive commitments. These views don't provide insight into our world, and don't help illuminate the results and implications from the rest of the sciences. Instead, they hang free of the rest of our systems of knowledge. If people want to spend their time on pinhead philosophy, then by all means have fun; let's just be careful that this idle play doesn't infect serious philosophical work.

I'm currently adjuncting at Fordham University, which along with Notre Dame is a safe haven for a certain brand of pinhead philosophy. I've been participating in a graduate student reading group that met yesterday to discuss a forthcoming chapter from Bill Jaworski's latest book. Jaworski attempts to defend a version of hylomorphism which treats objects as compositions of functional parts-- which looks great until you realize his understanding of functionalism is taken mereologically and applies only to living organisms, and is incompatible with any other treatment of functions from not only the scientific literature, but also from other treatments within philosophy (Cummins, Millikan, Dretske, etc). Bill's view holds that the only objects that exist are mereological simples ("whatever physics says the basic things are") and living organisms as emergent wholes, which he claims "cannot be given a physical explanation". Bill's view differs from similar accounts by van Inwagen, who holds that complete living organisms are the only composite objects, in that Bill also acknowledges that the functional parts of living organisms (hearts, head, eyes, etc) are also composite objects in his ontology.

Bill claims that his functional revision on van Inwagen is designed to remain compatible with empirical science, but this is lip service at best. What Bill treats as "functions" are really just the logical implications of a metaphysical view he's presumed from the outset; in other words, this is a paradigm of pinhead philosophy. The idea that any of this accords with empirical science is a joke; the fact that this kind of work is taken seriously in some corners of the academy is a scandal. The issue of the functional composition and individuation of objects is an open problem even within science, but this treatment doesn't take seriously the empirical literature that actually exists on the topic, or any empirically compelling examples. The examples he has chosen (the body-minus problem, for instance) only make sense from the perspective of the metaphysics he's already assumed, but are difficult to translate in any straightforward way into a serious scientific question. 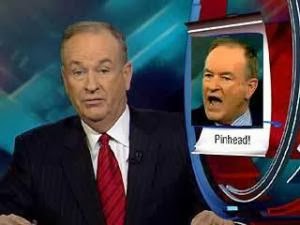 Bill seems to believe a functional decomposition of an organism will "carve nature at its joints". There are lots of methods for giving a functional analysis within the various sciences, but nothing like a general theory of objects or functions that can handle all the organizational phenomena we find in nature at all scales. There is certainly no reason for thinking that functional decompositions will be unique (that there is only one set of "joints") or perspective-neutral. Functional decomposition and system identification are two parts of the same project. To identify something as a "function" is already to specify that it plays a role in some containing system, so identifying functions goes a long way towards deciding which system is in question. Likewise identifying the system helps determine what we take to be its functional parts. Which is all to say that functional decomposition is a pragmatic affair: it depends on what systems or functions we are interested in, at what scale, and for what purposes. There are no unique functional decompositions of organisms; one and the same organism can be broken up along many distinct functional lines. Similarly, one and the same organ (the functional part of an organism) serves functions for a potentially arbitrary number of containing systems, implicating potentially several different organisms. Any view of functional analysis must take this ontological relativity seriously.

Bill rules these possibilities out categorically, without argument. He takes identity to be absolute, and claims that "he's not interested" in the alternatives, and moreover that "no one in the literature takes relative identity seriously". Consequently, any objections the audience had along these lines were nonstarters for a discussion. When I suggested that a serious understanding of the science demands an account of individuation, Bill replied that the question was not a scientific one but a philosophical one, and therefore the science was mute on the issue; he added that if I felt otherwise that I should "get an NSF grant and do an experiment". In other words, he was telling me to fuck off. It was a beautiful example of precisely the kind of distortion of the field that is required to sustain pinhead philosophy as legitimate. Bill's repeated invocation of the words "natural science" is used as cover for a deeply unscientific, deeply problematic methodology. It is, for lack of a better word, pseudoscience: a practice meant to give the appearance of epistemological weight and authority, but that floats free of anything else we know of the world.

Aquinas' worries about angels in space is a pseudoscientific worry, even though at his time there wasn't a proper science for him to contrast the practice with. Unfortunately, Bill has no such excuse.
Posted by Unknown at 10:49 AM