Your Life has Been Designed  (via +Winchell Chung)


But the 8-hour workday is too profitable for big business, not because of the amount of work people get done in eight hours (the average office worker gets less than three hours of actual work done in 8 hours) but because it makes for such a purchase-happy public. Keeping free time scarce means people pay a lot more for convenience, gratification, and any other relief they can buy. It keeps them watching television, and its commercials. It keeps them unambitious outside of work.


The article is largely pessimistic and critical, but we might approach the issue with a more neutral vocabulary in the hopes of being constructive. Your life has been standardized to fit a particular model: the model of the Ideal Consumer.

You aren't the ideal consumer. You are a real human being, and you fit the model only approximately well. The injustice of our system is not that you are coerced into conforming with the model. If it was, then correcting this situation would be a matter of authentic individual expression, which would presumably be contrary to the model (for instance, buying less stuff, monitoring spending more closely, not watching TV, etc). But of course, none of us conform to the model exactly, so the premise that individual expression is sufficient for correcting the injustice is obviously mistaken.

Keeping people tired, broke, and scared makes them malleable; Foucault used the word "docile", and there's good psychology backing the idea up. It takes additional time and energy to process decisions independently, and it is much easier to repeat the same behaviors, preferences, and viewpoints that have been
consumed through the media. But I don't think docility explains the failures of the world today much better than a lack of individuality. Presumably, a docile public can be pressured into doing _anything_. So why aren't they being pressured into doing something more humane and productive? 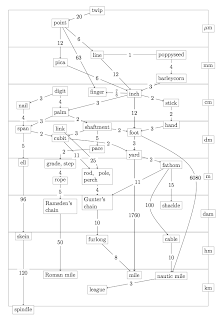 The problem is with the model of the Ideal Consumer itself; we've been given a model that, when we conform to it, produces an economically imbalanced and radically unjust system. That model is reinforced in our public and private institutions in uncountably many ways; too much to attack directly. But we should be clear in our approach: our goals aren't just in reversing the direction of influence, but in changing the framework in which influence operates; not just changing who has power, but changing the dynamics of power itself.

Consider, by way of example, the distinction between the standardized meter and the conventional models have historically dominated metrology in just the English speaking world. The confusing basis for the nonstandard models might have suggested that any standard measure of length will be arbitrary and confusing, but this isn't so. Some models really are less confusing than others, if you are smart about how you standardize. When standards are clear and useful, when they are not weighted down by arbitrary historical circumstance, and when they don't conform to the interests of only an elite few, then they aren't sign of injustice. The universal adoption of a standard meter is not an act of coercion. It was, instead, and for all interests concerned, an improvement.

But if the Ideal Consumer is a poor model for the operation of our social/economic system, what better model to replace it with? What meter should replace our clumsy foot? I ask not to take advantage of docility; even at their most incorrigible, there must be some standard through which the individual interfaces with other networks. If we aren't thinking about end users as Consumers, what should we think of them as? Citizens? Debtors? Rational Agents? Dasein? Are there any serious alternative theoretical contenders by which we might standardize the various functional roles humans might play in the operation of the social and historical circumstances in which they find themselves?
Posted by Unknown at 4:49 PM